Bangalore to Goa - And Back!

A long drive..something i wanted to do ever since i bought the car. Two years later it happened, a road trip to Goa!
We started from Bangalore at 9:30 in the morning. Quickly getting on to NH4 (well there's something to be said about staying in the suburbs) we reached Tumkur in quick time. Here we learnt the first lesson of a road trip. Look at the maps beforehand. It HELPS! We missed the crucial bypass and entered the city much to our dismay. Snail paced traffic and narrow lanes slowed us down until we managed to get on the highway again..whew..that was a relief! 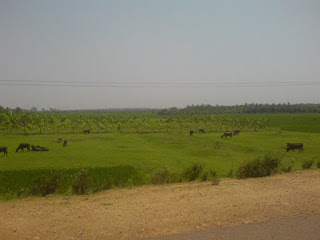 We didn't stop again till lunch. Around 2.00 p.m very close to Davangere. A pretty neat resort right on the highway. Tanked up, we were ready to hit the road again. The roads till Davangere were a breeze. Speeds of 100 -120K (it's a WagonR. get real!) were easily done. I was adamant about going through Karwar. So we decide to take the NH to Karwar from .............. . Easier said than done. The roads became interesting to put it mildly. Hairpin curves and the ghats were sufficiently engaging but the pouring rain just made it a party you wouldn't want to miss. Near zero visibility and the thought of imminent collision with the unknown kept the adrenalin pumping. To wait for the rain to abate was an option we did consider briefly but decided in that we'd rather have a comforting bed by nightfall rather than be stuck in the middle of the ghats in a downpour that refused o let up... The smell of the sea hits you even before you enter the town, the salt in the air..ah! We reached Karwar at 9. 30... all car and body parts intact and checked into a hotel right next to the beach. 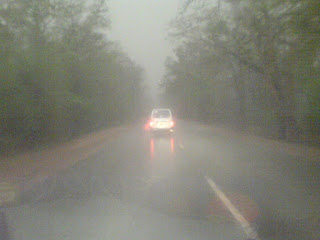 After celebrating our release from the rain gods, we went of to sleep. I woke early the next day and decided to visit the beach. Nothing spectacular here, was lucky enough to get there before the crowds. Not a very clean beach for early morning strollers like me. 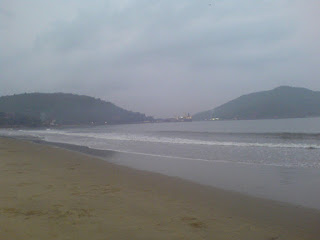 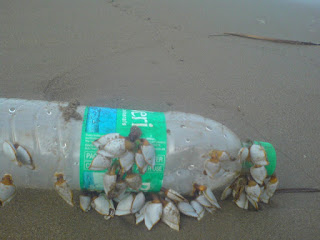 We checked out after breakfast and hit the road immediately. 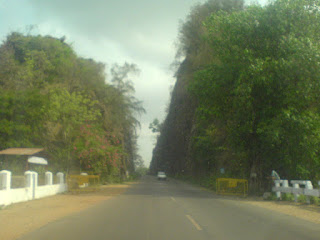 This is how the exit from Karnataka or rather the entry point to Goa looks, very befitting i thought :) From karwar its about 120 Kms. We should have done this in an hour and half, but it took us much longer.
The drive is quite beautiful but was marred by the constant stoppages for road work . We reached Goa at about 12:30.
More to come....
for all those looking for a very detailed bangalore to goa roadmap..here's the link to one i was given by a friend (thanks suraina!) ......... this is just one route...
if you find this useful please leave a note..or if you have alternate maps give the link here...
bangalore to goa roadtrip driving to goa