Showing posts with the label Brahmagiri Hills
Show all 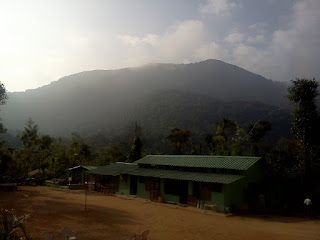 Bringing in 2011 at Misty Palms, Coorg ( located in Terelu Village, South Coorg, at the foot of Brahmagirihills) It wasn't supposed to be this way. We had been promised a home stay within a coffee estate, a fishing trip and most importantly complete seclusion from the banalities of city life. Gypped by Spen who had the nerve to actually offer us ice cubes in a chembu (small pot) for use over the new year celebrations, what we got was a house on the main road between Hunsur and Gonikoppa. We refused! city slickers we maybe, idiots? certainly not! We worked the phones and found a home stay in Virajpet for a day. If it wasn't for the fact the place had already been booked for new year's eve, we would have continued to stay there. Working the phones again we found Misty Palms. Ravi who manages the place initially assured us rooms, but backtracked later and offered one room for the five of us! and the word 'adjustment' kept surfacing through out the conversation.
1 comment
Read more
More posts