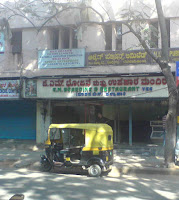 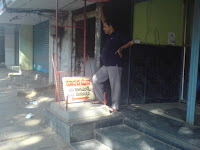 This is a restaurant tucked away in between the busy streets of Gandhinagar in Bangalore. It's definitely not haute cuisine, but if you wanted a taste of the everyday gruel that most Kanandigas enjoy, it's the best place. Located on the road parallel to the national market road (can't recall the name now!), the name that most people know the restaurant by is practically invisible and is overshadowed by the prominently displayed ‘G M Boarding & Restaurant’. If you weren't looking for it you could mistake it for one more of the cheap and ubiquitous darshinis/fast food joints that populate the city and give it the go by.
The walls are dirty and there is a large hall with three rows of 4-seater tables. You are encouraged to share tables with strangers, if you're group with less than four members, we ended up sharing ours with a constable taking his lunch break. Steel plates with rounded edges are already placed on the table. A server comes around with hot water which he pours into the plate. You rinse the plate and empty the water into a bucket, also carried by him. Now that you're satisfied that the plate is clean, it’s time to place the chakki under the plate. chakki? a small square block of wood about 1 cm all around. The chakki is placed under the plate at the edge just inside the perimeter. So the plate is angled towards you, but still pretty decently balanced.
Although you've guessed why, it still brings a smile when the waiter pours the sambar into the plate and it flows along the slant and forms a small puddle. A simple oatmeal curry is also served and some freshly made lime pickle. Then the piece de resistance, a guy walks out of the kitchen dressed as anybody working in a hot kitchen would probably be, dirty vest and lungi ,carrying a tray above his shoulder. The tray has a huge lump of mashed ragi which he quite artfully breaks into a small ball about the size of your fist, yes! with his hand, and serves you what is referred to locally as 'ragi mudde' (ragi balls). Now you take a little bit of the ragi mudde, roll it between your fingers into a smaller ball, dip it in the sambar , place it in your mouth and swallow it. Chewing is generally not advisable, because the consistency of the ragi would make it feel like you were munching on a cheap piece of flavourless gum. Buttermilk is the beverage of choice, most people order a glass along with the meal; strangely, it has a strong garlic flavour to it. You can have your fill of ragi muddes and ask for additional balls, also determine its size right there when he's serving you. It's a thoroughly enjoyable meal and you are sated for less than 30 bucks.
As you walk out you’re struck with the thought that sometimes ‘simple is really beautiful,’ even if it’s a little dirty on the outside.
Bangalore Restaurants