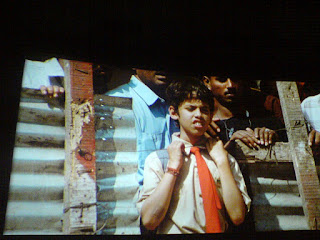 Stars on the Ground

An incredible debut: Aamir Khan rocks!
Taare Zameen Par is a movie that will make you sit up and notice, from the opening titles to the final credit roll, the 'perfectionist's' deft touch is seen everywhere.

A simple story, crisply told, of a dyslexic boy, Ishant Avasti and his journey from being
the “duffer" to "hero" and "darling of the masses". If I had one grouse with the movie, it would be this. You don't necessarily have to win, to be special! But given the nature of the story the director probably decided that he had to play to the gallery at some point...

Ishant is the younger sibling in a Mumbai urban middle class family, living in a world all his own. He fails consistently at school and is constantly hauled up by parents, teachers and peers alike, for his inability to perform the simplest of tasks. What the world and
his teachers don't know is that Ishant has a problem, dyslexia, a learning disability that
manifests primarily as a difficulty with written language, particularly with reading and
spelling. Unfortunately, and to quote from the movie, what they see are the "symptoms of a disease" that is not well understood even today by the teaching community.

When matters come to a breaking point, the clueless father decides that boarding school will drive the 'devil of mischief' away and instill in Ishant the rigorous discipline that is needed for success in today's world. Distanced from his loving brother and mother, Ishant loses interest even in the one activity that had everyone hooked, painting. More of the same behaviour from the new set of teachers ensures Ishant's retreat into a shell and he quickly becomes incommunicado to the rest of the world.

Enter Aamir Khan a.k.a Ram Shankar Nikumbh and what an entrance!, dressed as a circus clown and singing gibberish, the replacement art teacher mesmerizes his audience of nine year olds with a direct and open approach that as expected gains him ardent fans among the students and jeers from his colleagues. Nikumbh is intrigued by Ishant's behaviour and decides to investigate. He quickly discovers the reason for Ishant's silence and finds shades of his childhood fears mirrored in the young boy. Nikumbh visits the parents to confirm his suspicion and is appalled at the parents’ ignorance.

The rest of the movie chronicles Nikumbh's attempt to educate the world (specifically Ishant’s) about dyslexia. Using appropriate instruction techniques Nikumbh helps the boy gain lost ground and regain his confidence. As the movie comes to a heart warming end, you feel, like all good movies do, that you have been part of an enriching experience.

A brilliant performance by Darsheel Safary as young Ishant and a restrained effort from Aamir brings the story alive for the audience, reflected in the copious tears witnessed at the movie theatre. The music by Shankar, Ehsaan & Loy is predictable but interesting. Outstanding direction, great cinematography and a superb cast makes this one movie that you should watch!
Hindi Movie Reviews