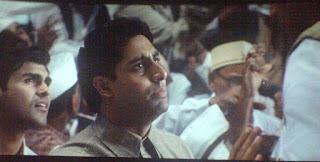 Yes! Managed to squeeze in the time to see it before it vanished from the screens. The tale of Gurukant Desai; unapologetic manipulator and hardened entrepreneur. Mani Ratnam as always is the master of story telling with his signature shots and picture perfect scenes. His choice of Abhishek Bachan for the role of Gurukant Desai is dwarfed only by the choice of Mithunda for that of the fiery editor Manik Dasgupta of 'The Independent'. An unabashedly inspired movie despite what the disclaimer says, it draws heavily on the life of Dhirubhai Ambani and his extraordinary rise in the world of money making. It chronicles the struggle from his peasant origins , through the adolescent years in Turkey as a petrol attendant, the entrepreneurial trials in post independence but still colonial Bombay and the eventual ascendancy to national iconic status as the chairman of Reliance..oops.... Shakti Group. The director has tried to walk the fine line between either deifying or vilifying this fascinating character rather artfully. Aishwarya Rai plays the "behind every successful.........there is a woman' part to perfection. Her role is not very meaty considering that this is a biopic but she does a great job as the dutiful and supportive housewife. There is chemistry! not the 'sparks flying' kind but it does make you wonder if it reduced the burden of acting a weenie bit. Madhavan as the editor's protege is dazzling in the brief part he plays. Vidya Balan as the editor's multiple sclerosis affected niece is patchy in parts. A first for Bollywood!, the most spontaneous kiss ever, is recorded between these two characters when she rather unconvincingly tries to dissuade him from marrying her. AR Rahman's music is catchy, but the background score is far more impressive. Saroj Khan's choreography is rather insipid.
The movie celebrates the spirit of entrepreneurship and is timed nicely with the recent chest thumping in theIndian business world. It inspires! and encourages you to dream, more importantly, convinces you that dreams can come true!
Hindi Movie Reviews